With a client base surpassing 5 million people, TIAA is one of the largest retirement funds in the world. What most of us don’t realize is that TIAA is also the largest owner of farmland in the world – and it’s getting bigger.

As a TIAA client who grew up in farming, I am angry about this. TIAA knows that taking ownership of farms away from families and communities isn’t going to be popular. That’s why they prepare a “sustainability report” each year to try to soothe any concerns that might emerge among their clients who are unlikely to look too closely at the details.

I recently picked up TIAA’s latest sustainability report with particular interest, because back in March, I had a chance to spend a few weeks in the Midwest and take a closer look at some of TIAA’s farmland. What I learned shed a lot of light on the way the reports are used to deceive TIAA clients.

New in this year’s sustainability report was TIAA’s claim that their investments advance the United Nation’s Sustainable Development Goals, particularly Goal 2: End hunger, achieve food security and improved nutrition and sustainable agriculture. As an organization dedicated to these same goals, we at ActionAid know that TIAA’s investments are doing the exact opposite.

We work with Brazilian partners to support human rights and the right to food in Brazil. And we have seen that TIAA’s accumulation of land in northeast Brazil is fueling land speculation and converting the biodiverse Cerrado region into massive soybean plantations. Communities are losing access to their common forests and pastures, and their waters are drying up and being poisoned by nearby soybean plantations owned by TIAA and other investors. These investments have decimated livelihoods and local food production, threatening the right to food, forcing people to move, and damaging local communities’ cultures and ways of life.

In a new report on their farmland acquisitions, TIAA doesn’t exactly admit that they bought land that had been grabbed from communities using fraudulent titles. Instead they say, “We strive to continuously improve our process for determining land rights, particularly in regions with maturing legal structures.”

In fact they bought land in Brazilian states where corrupt means have been used to convert community commons to private land, and where violence is used to enforce large land owners illegitimate claims. The World Bank is only now implementing a controversial project in the region to address its concern that “tenure informality also extends to medium and large-scale farmers.” There is a risk the World Bank will focus on creating new legal titles to benefit investors like TIAA rather than documenting community land rights.

TIAA also states that they “emphasize the purchase of existing agricultural land rather than converting virgin land or forest into farmland.” This statement covers up the fact that they have often purchased land that was recently converted to farmland by other land grabbers. In some cases TIAA deforested parts of the land after acquiring it.

What the land is used for is also an issue. TIAA’s main crops in Brazil and the United States are soybeans, corn, and sugarcane. When produced and controlled by large companies, these so-called flex crops can undermine food security rather than strengthening it. These crops feed into the biofuel industry, which environmental analysts recognize as a false solution to climate change and an inhibitor of real solutions.

These crops also go into the production of sweeteners, oils, and feed for animals kept in factory farms. This kind of production fuels unhealthy diets of sugar, fats and cheap meat in the U.S. and other industrial countries.

For decades, the U.S. government has shaped agriculture policy to match its global free trade agenda, promoting large-scale production of commodity crops like corn and soybeans. This approach has economically undercut family-scale and diversified farmers both in the U.S. and abroad in countries like Mexico and Guatemala.

The result, particularly for the last 30-40 years, has been family farms in the U.S. being forced to expand to stay competitive, to the detriment of new entry farmers having access to land, and family farmers in Central America being forced to sell their land and become migrant farm workers to make a living.

There’s more. TIAA tells clients that it engages in sustainable agriculture, but its plantations in Brazil and the U.S. are no different from other large-scale industrial agribusiness. Without local management and accountability, the activities of these plantations are environmentally and socially damaging, especially compared to the practices of smaller local farms producing diverse crops and animals.

And when it comes to TIAA’s claims about transparency, reality paints a different picture. Responding to pressure from our campaign, they published a map showing the approximate locations of their fields – but not enough information to easily monitor their practices.

So we turned to paid investors’ services and satellite images to identify the precise boundaries of many of the thousands of acres they own in Illinois. We found out that TIAA owns land under many different names, including Westchester Group, Premiere Farm Properties, IAI USA LLC, and Global Ag Properties.

TIAA also buys the flattest and easiest-to-manage land. However, this does not prevent the chemical fertilizers and pesticides they use from flowing into streams and rivers. It just means chemical runoffs are less noticeable, and other farmers are left with the costliest land to manage sustainably.

TIAA’s heaviest concentration of land is in the watershed of the Sangamon River and its tributaries, which are seriously polluted with silt from fields and nitrate and phosphorus from fertilizers. 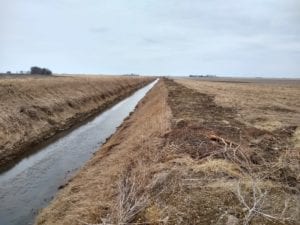 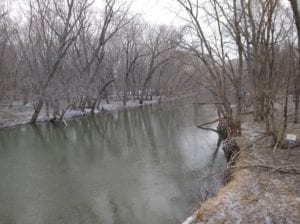 TIAA’s operators use the same basic practices that are used in almost all large-scale row cropping in Illinois: a simple rotation of corn and soybeans. In addition to chemical fertilizers, this means the use of pesticides like the most prevalent weed-killers such as Atrazine and Roundup, which have been linked to the contamination of drinking water and millions of dollars in damages due to cancer lawsuits. TIAA’s sustainability report only says that most of their operators use “variable rate or equivalent technologies to efficiently apply fertilizer and/or pesticides.” 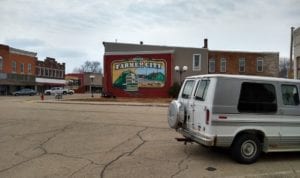 In the course of my field research in Illinois, my first stop was Farmer City… Photo: Doug Hertzler/ActionAid 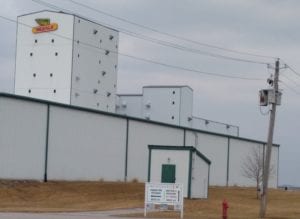 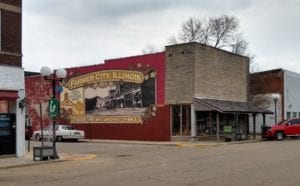 The name Farmer City illustrates the farm economy’s importance to the region’s urban centers. Yet the downtown Farmer is plainly hurting. Many houses, grain elevators, and storefronts are in disrepair, and the busiest shop had signs announcing: “Estate Sale today.” Salt Creek flows through Farmer City and into the Sangamon River which provides drinking water to the city of Decatur (Ill.). It is also used for manufacturing corn sweetener that is shipped all over the world in the form of soft drinks. Photo: Doug Hertzler/ActionAid 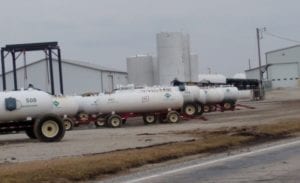 The DNC got it wrong on a climate debate