Tanzania is a primarily agriculture-based economy, which means that the agriculture sector is critical for reducing poverty and improving food security. In recent years, however, the sector has stagnated due to three major factors:

In an effort to promote growth and inclusion in the agriculture sector, the government of Tanzania partnered with the Global Agriculture and Food Security Program to launch the Expanding Rice Production Project (ERPP). The goal of the ERPP is to improve the food security and incomes of small-scale rice farmers. It aims to do this by improving rice productivity, linking farmers to markets, and developing the capacity of farmers and communities through the adoption of improved rice varieties and production technology.

Key Findings on the Implementation of the ERPP

In collaboration with our colleagues at ActionAid Tanzania, we commissioned a study to showcase successes and lessons learned from the implementation of the ERPP. This study was based on visits to the districts of Kilosa and Mvomero in the Morogoro region, Tanzania Mainland, and two districts in the Unguja North region of Zanzibar.

The ERPP reached farmers and producers experiencing the highest levels of vulnerability and poverty, especially women and youth. It has initiated momentum in improving rice production, raising household income, and stabilizing food availability.

The full report can be downloaded in French or English.

Does the project target small-scale producers?

The project targets women and small-scale producers in 11 districts on the mainland and three districts on the Zanzibar islands. These areas were selected because although production was low, there was greater potential to improve through irrigation and the use of improved seed varieties.

How has the project reached small-scale food producers?

Demonstration plots were used for peer learning. Farmers received training in an agroecological method called the System of Rice Intensification (SRI), which increases the productivity of irrigated rice by changing the management of plants, soil, water, and nutrients. Once they learned to use this method, they were able to establish more plots to sell seedlings to other farmers.

Through SRI, farmers tripled their production:

“I was skeptical about SRI and Saro rice varieties which were introduced because I used to grow a local variety call ‘supa’, though I only got five to eight bags of paddy each weighing 100kgs. I decided to use SRI and Saro seed varieties on a half-acre plot to experiment. After harvesting 15 more bags of paddy than I expected, this season I allocated the whole one-acre farm to produce rice using SRI and Saro seed, and I have harvested 33 bags of paddy.” – Hadija Hassan, farmer, Mvumi Village, Morogoro Region

However, farmers often faced challenges when trying to expand production area. People from other regions come to rent farms before the season starts, increasing demand and rental price per acre and making it difficult for farmers to expand and earn more income.

Farmers had greater access to technical training, networking opportunities, and resources they received for their farms. Some farmers also acquired foundation seeds, which made it easier for them to access improved crop varieties.

It would be worth exploring opportunities for farmers to be trained on using organic inputs such as compost and mulching, so that they wouldn’t have to depend on subsidized inputs such as fertilizers, as there were delays in delivery or difficulties in paying for the product.

Overall, farmers saw an increase in income as they were able to store and sell surplus paddy in the local markets. Farmers with a good grasp of SRI generated additional income by being hired by other farmers in the community to learn the methods. Beyond SRI, there is greater potential to increase income if farmers had warehouses or processing machines.

“There is improvement in wellbeing since I adopted SRI and Saro varieties. We still have problems in marketing because we are selling paddy. If we could process paddy and sell rice we could have many options for where to sell in order to get better prices.” – Koba Majeshi, farmer, Komtonga Village, Mvomero, Morogoro Region.

For farmer participants, the adoption of better production technology, namely SRI, is ensuring the availability, accessibility and affordability of food.

“Before starting SRI farming, I normally experienced food shortage from January to March and some days I had to look for casual labor in order to provide food for my family. But things have changed now. SRI farming helped me to have enough food reserves, and I can sell and buy other food items when I want.” – Salum Abdallah, farmer, Cheju, Zanzibar

The project focused on reaching and strengthening producer groups and associations at the farm level, helping previously inactive producer groups become active again while providing a platform for farmers to be hired by others interested in learning and preparing plots for SRI farming.

Overall, the project activities have been successful in mobilizing farmers, providing technical assistance, and raising awareness about sustainable methods like SRI that can move communities out of poverty.

Farmers, especially women farmers, were consulted through village meetings and initial training workshops. Farmers were also mobilized to volunteer demonstration lots and to participate in group learning activities, which were implemented by the farmers themselves. As a result, farmers have greater ownership and influence over the project.

The role of nongovernmental organizations and civil society organizations was mainly seen in the designing stage of the project and now through annual and regular evaluation meetings. However, as the project increased the capacity of extension staff, it left no room for farmers and other local actors during the actual implementation of the project.

How does the project reach and benefit women?

Within two years of project implementation, women made up 50% of all project participants. Even women not directly involved in the project are increasingly adopting the SRI method after realizing how much labor is saved.

“I like SRI because it uses less of everything from seed, water, and labor, while harvest are double or tripled. It allows us women to have more time to take care of children and to cook.” – Subira Kombo Vuai, farmer, Cheju, Zanzibar

However, there needs to be a more systemic way of including women in the project. Generally, most of the project’s technical experts are men, and women face limited options to manage household responsibilities in order to increase their participation in meetings.

“Our irrigation scheme is traditional and is surrounded by three rivers. During excess rainfall we have fewer or no harvests. If this project intervenes by building irrigation canals and water controlling gates, it will build resilience against climate changes especially during excess rainfall.” – James Peter Mbiu, Irrigation Officer, Mvomero, Morogoro Region

On the other hand, the overall project lacks a systemic approach to tackling climate change. The project did not specifically target climate resilience at the community level.

Since participating in the ERPP, Ritha Rogers now harvests almost 4 times as much rice as she used to, Tanzania 2018 [Hans Ngoteya/ActionAid]

Overall, the project was successful in mobilizing and reaching women farmers and vulnerable households. To improve sustainability, resilience, and gender dimensions of future interventions after the completion of the project, our study recommends the following: 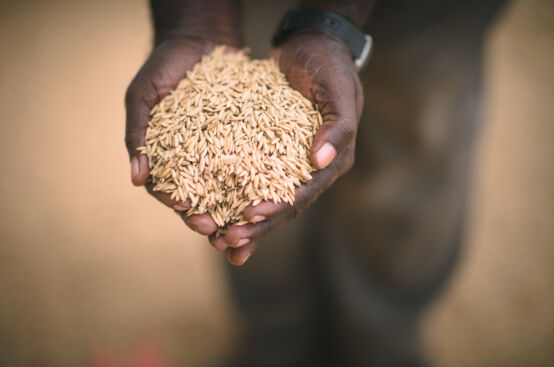 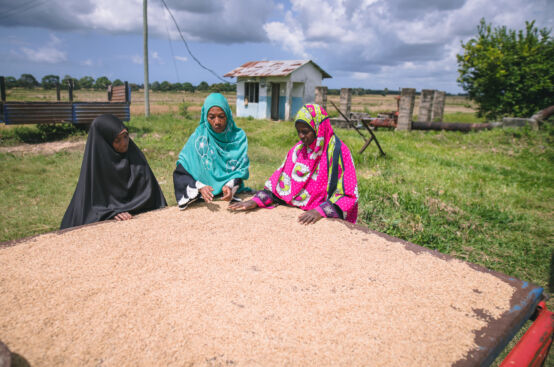 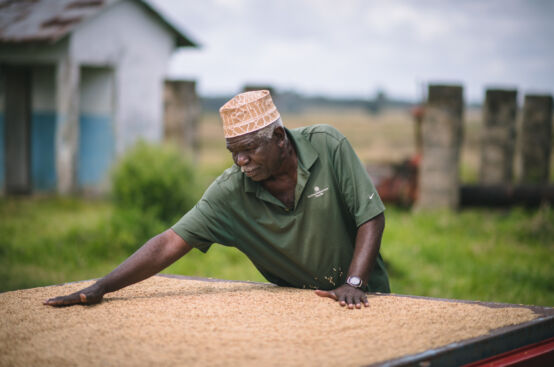 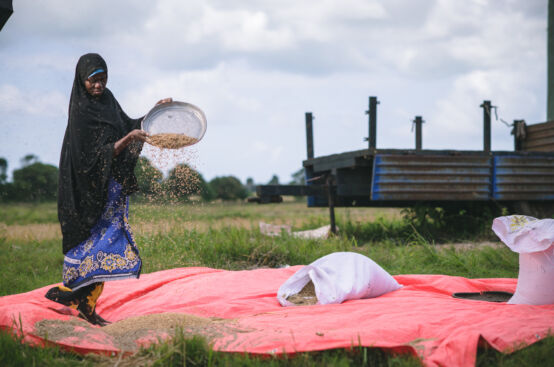 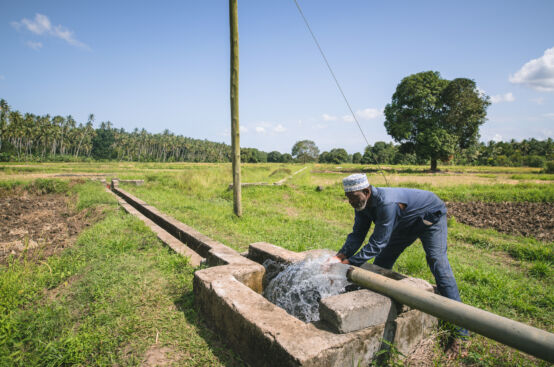 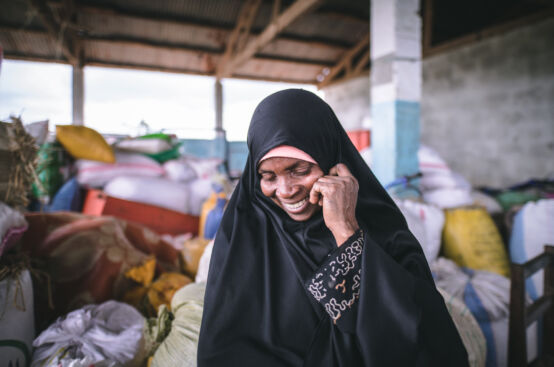 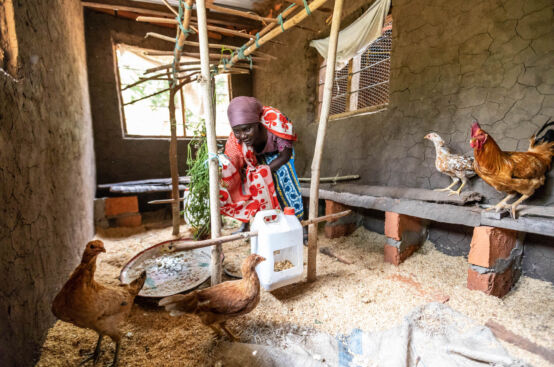 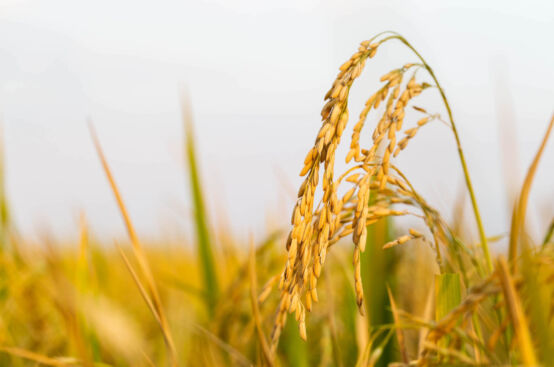 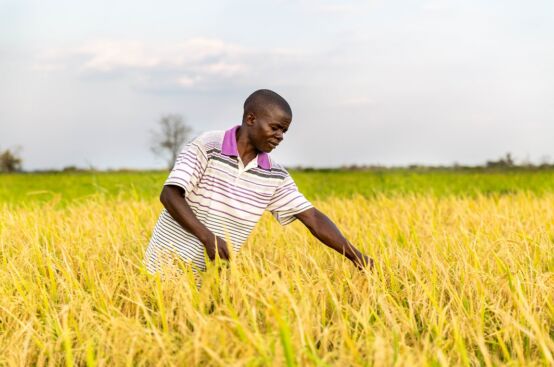