The Food and Agriculture Sector Development Project in The Gambia

Is GAFSP Reaching Small-Scale Food Producers in The Gambia?

With a population of only 1.8 million people, The Gambia, nestled right in the center of Senegal, is Africa’s smallest mainland country. It is a low-income country, but one with noticeable declines of overall poverty in the last decade and an increase in economic performance in recent years. In other words, The Gambia is small, but mighty.

Unfortunately, this economic growth, no matter how impressive, has not been inclusive.

With a relatively undiversified economy and a heavy dependence on tourism, rain-fed crops for agricultural production, and imports for food security, the country remains highly vulnerable to external shocks. Most recently, the Sahel drought between 2011 and 2012 left long-lasting effects, knocking agricultural production and negatively impacting household food security and the availability of seeds for the following season.

To address these impacts, The Gambian government teamed up with the Global Agriculture and Food Security Program (GAFSP) to finance the Food and Agriculture Sector Development Project (FASDEP). The goal of the project is to reduce rural household poverty, food insecurity and malnutrition through increased agricultural production, productivity, and commercialization.

In collaboration with our colleagues at ActionAid International The Gambia (AAITG), we commissioned a study to showcase successes and lessons learned from the implementation of this project. This study was based on interviews with small-scale food producers, farmer-based organizations, policymakers, and technical officers as well as visits to project sites.

Overall, the project reached an estimated 3,926 households and 26,697 individuals, over half of whom were women and youth. Some notable achievements are the rehabilitation of over 50 miles of roads and the creation of 69 agro-business enterprises and commercial poultry farms for both schools and communities.

The full report can be downloaded in English.

The project targets small-scale producers owning fewer than three acres of land and who are generally dependent on rainfall for their crops. Before the project, these farmers experienced inadequate rainfall, salt intrusion, poor soil fertility, soil erosion, lack of access to roads for markets, lack of enough seeds and fertilizers, limited capacities for packaging and processing foods, limited entrepreneurship skills, and limited practice with livestock fattening.

Though farmers are still experiencing some of these issues particularly linked to climate change, such as inadequate rainfall and salt intrusion, the goals of this project are nonetheless supporting them to confront the compounded issues in a sustainable way. This includes facilitating better access to markets, streamlining practices that retain water for better crop growth, and promoting conservation efforts for upland conservation to reduce erosion and improve soil fertility. The project also supports farmers with machinery, infrastructure such as roads and markets, more seeds and techniques for animal fattening.

How has the project reached small-scale food producers?

In response to poor infrastructure and inadequate support systems for resources such as water, seeds, and fertilizers, the project provided farmers with solar-powered boreholes and water reservoirs, fences to keep animals out of gardens, non-genetically modified seeds for crops such as carrots, lettuce, and early maturing tomatoes.

“Our garden situation was very bad. When we grew our crops, animals came and ate some of them due to our weak fence. Water was very difficult to get. I used to have only two or three garden plots. But now with the project fence, I have eight plots, and we can grow during both the dry and rainy seasons.” — Fatou Kebbeh, farmer in Sare Babou, CRR South

The project constructed more than 50 miles of rural road networks, making it easier for farmers to reach their farms and transport their produce to local markets.

“We used to find it very difficult to travel to work on the swamps and also transport our produce. Sometimes our donkey would get stuck in the mud and potholes, and sometimes our rice produce would get wet, or the donkey would get hurt. But now it is not happening anymore. The road is good.” — Isata Cham, farmer in Chamen Nianija, CRR North

Additionally, farmers who used to only grow one crop, such as millet or rice, received support with rearing poultry and rams. This diversified their production and strengthened their livelihoods.

“We had been growing maize and sesame for three years before FASDEP, and our income had been limited by poor harvest. But now we have a broiler production scheme, so we can sell every six weeks and have a little income. Also, with poultry waste, we can improve our backyard garden located within the broiler farm.” — Mam Jawara, Secretary of Group Juboo Poultry Farm, Sinchu Madado, CRR South

A central goal of this project was to build farmers’ own capacity to improve crop and livestock production .

“We used to call a Livestock Assistant to help us with diseases and other management problems, but now we know what to feed our animals, how to diagnose and treat disease and how to determine our profits and losses.” — Fame Njie, member of Panchang Women’s Group, CRR North

In order to reduce labor and time spent on labor, the project provided communities with small machinery such as power tillers and rice milling machines as well as solar-powered boreholes and water reservoirs in gardens. These technologies not only improve food processing and preparation but also take a huge burden off of women:

“Before the project, we used to fetch water manually from the mud well, and it was laborious. Some of the plots used to dry up because of lack of water. When the project came and fenced this place and installed pipes and a reservoir, it [the work] is much easier for us.” — Sosseh Bojang, mobilizer, Sukuta women’s Garden, WCR

Overall, small-scale producers saw an increase in income. Specifically, producers at the Bakau Women’s Garden have doubled their incomes from the sale of their produce. The fences constructed around the gardens have successfully prevent animals from intruding and the water infrastructure provides stable access to water, making it possible to produce year round.

Small-scale producers involved in commercial chicken production also reported an increase in their earnings as a result of the project’s support. In Sinchu Alagie, CRR South, the income generated from the sale of broilers over seven production cycles was equivalent to $200,000 for the group.

“Before FASDEP came we used to work on the farms, got paid, and gave each other small loans from our own savings. When FASDEP came and brought us 33 rams, we fattened them, sold them, and kept a good account.” — Adama Cham, President of Jokereh Endam in Sinchu Magai, CRR South

Alternative livelihoods are supporting rice farmers, including Adama Cham, who is sending hers on to school with money she’s earned from ram fattening. [Mohamed Lamin touray/Actionaid]

Investments in different food products, such as ram fattening, gardens, and poultry production are providing access to dietary diversity and food that would otherwise have been imported. Small-scale producers are generating income which they can use to purchase foods they cannot produce themselves, supplementing locally produced vegetables with other nutrient-rich foods.

“We used to eat produce from our vegetable gardens for only a few months during the dry season, but now we can grow in both seasons, and we [have enough to] eat and give to our relatives.” — Fatou Kebbeh, farmer in Sare Babou, CRR South

Improving access to markets is also enhancing food and nutrition security. The construction of more than 50 miles of road networks is not only linking big farming communities but also making it easier for farmers and individuals to access markets such as lumo, the weekly market where many people purchase their weekly food items and where retailers buy wholesale foods to resell to remote communities.

The project used a group approach to reach small-scale producers. The National Coordinating Organization for Farmer Associations The Gambia (NACOFAG) played a significant role in organizing, mobilizing, and coordinating the members to participate in various capacity-building activities related to agricultural production techniques, organization, and governance management.

This study has shown that there has been wide-ranging engagement and participation of civil society organizations. The Association of Non-Governmental Organizations (TANGO), Gambia Chamber of Commerce and Industry (GCCI), ActionAid International The Gambia (AAITG), and NACOFAG have all been involved in supporting the goals of this project. Both AAITG and NACOFAG played key roles in project design, such as organizing consultations with farmers, inviting expert support, and providing technical and organizational input.

How does the project reach and benefit women?

FASDEP supports activities traditionally done by women due to the way labor is commonly divided along gender lines throughout Africa. These include gardening, small animal fattening and breeding. Our study shows that more than 70% of the activities implemented so far are dominated by women farmers.

“If you look at the current investments supported by FASDEP, you will find out that women are benefitting from small ruminants schemes, seeds and fertilizers for horticulture production, broiler production schemes, and in the fish ponds and market structures” — Musa F. Sowe, National President of NACOFAG

During design and implementation, the project worked with existing producer groups, most of which were comprised of 90% women. More often than not, the president, treasurer, and auditor were all women, with men taking only advisory roles. The project promoted other leadership roles for women, including decision making about production, the purchase, sale, or transfer of assets, and public speaking.

Promoting women’s access to land was also an important component of this project, as lack of access to land is one of the main constraints affecting small-scale producers. FASDEP supported women to access and control land collectively through community gardens and commercial poultry productions. Members who were landless are now able to acquire farming space. Each woman has the opportunity to make her own decisions about production and benefits from economies of scale. Slowly but surely, the project has made decisions about land use, which were traditionally made by men, available to women.

A positive, indirect impact from the commercial poultry and ram breeding scheme, as well as the processing equipment such as rice milling machines, is the reduction of time and energy spent on manual labor. Likewise, solar-powered boreholes and hand pump wells are indirectly providing access to safe drinking water, reducing the burden of unpaid care work on women.

Access to markets has also opened up the opportunity for women producers to participate in the yearly trade fairs organized by The Gambia Chamber of Commerce and Industry. This has provided women with more opportunities to sell their produce, network with other businesses, and establish new contacts.

The project promoted climate resilience through initiatives including:

Fatou Sidebeh-Ceesay, long-time member of Bakau Women’s Garden, says the construction of fencing, boreholes and a waiting shed has made work easier for her and other gardeners. [Mohamed Lamin Touray/ActionAid]

Overall the project has been successful in reaching women farmers and vulnerable communities. Economic security and food security is increasing through these initiatives, but more work can still be done.

FASDEP and future projects should: 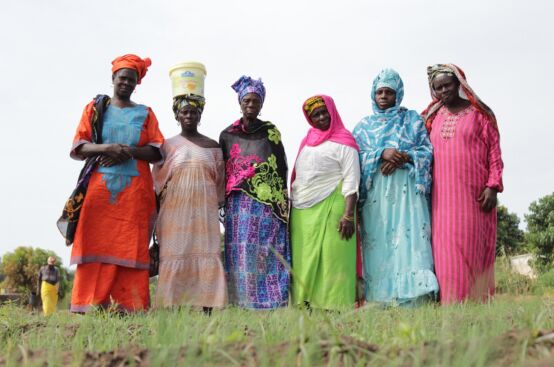 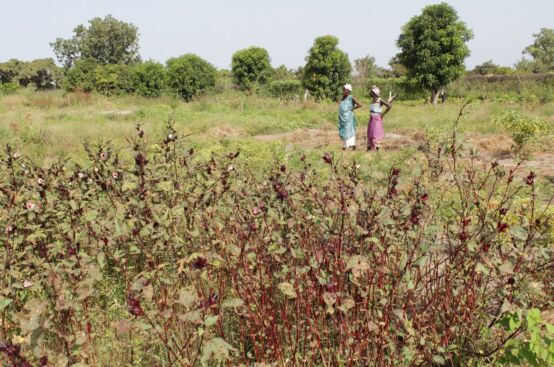 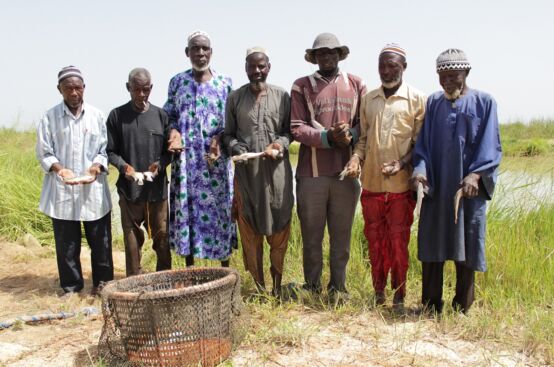 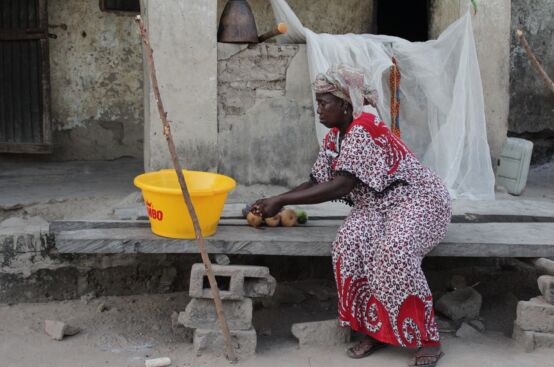 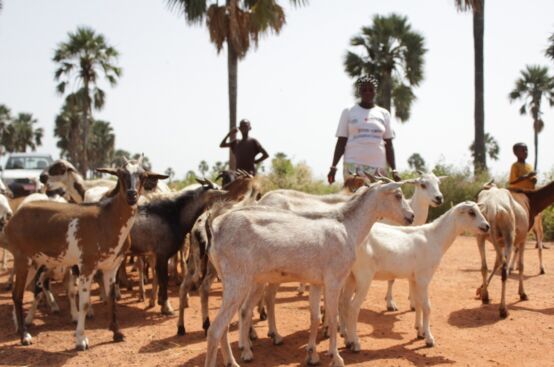 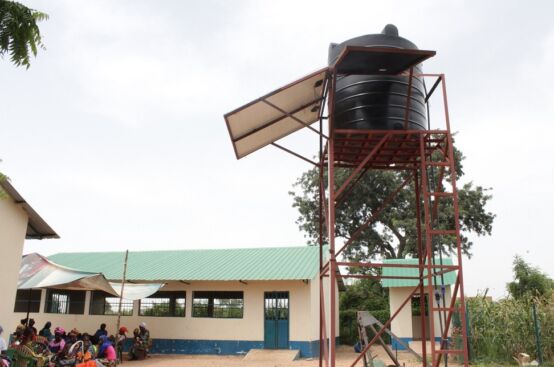