One Minute With Dona Dijé of the Brazil Babassu Nut Breakers

Known to her community as Dona Dijé, at 68 years old, Afro-Brazilian Maria de Jesus Bringelo is one of the most important national leaders of the women babassu nut breakers movement in Brazil.

More than 18 million hectares of Brazilian land is covered by babassu palms and the babassu nut that comes from the tree is used extensively in food, as well as soap and beauty products.

In the 1970s, together with two other community activists, Dona Dijé started a letter campaign calling on the Pastoral Land Commission of the Catholic Church to support the local women nut breakers who were being forced off their land by cattle ranchers. When a court found in favor of the women nut breakers who claimed ownership of the land, their community was surrounded and threatened by gunmen. In 1979, they were forced to flee when their houses were burned to the ground.

Dona Dijé escaped to the nearby woods with her newborn child, where they lived for three days, until they were offered shelter by the town church. A year later, they returned to the land to rebuild their homes. In 1985, the National Institute of Colonization and Agrarian Reform acknowledged the community’s right to the land, ruling against the cattle ranchers. The women nut breakers created their own associations to fight for access to the babassu palm trees and protect community livelihoods. 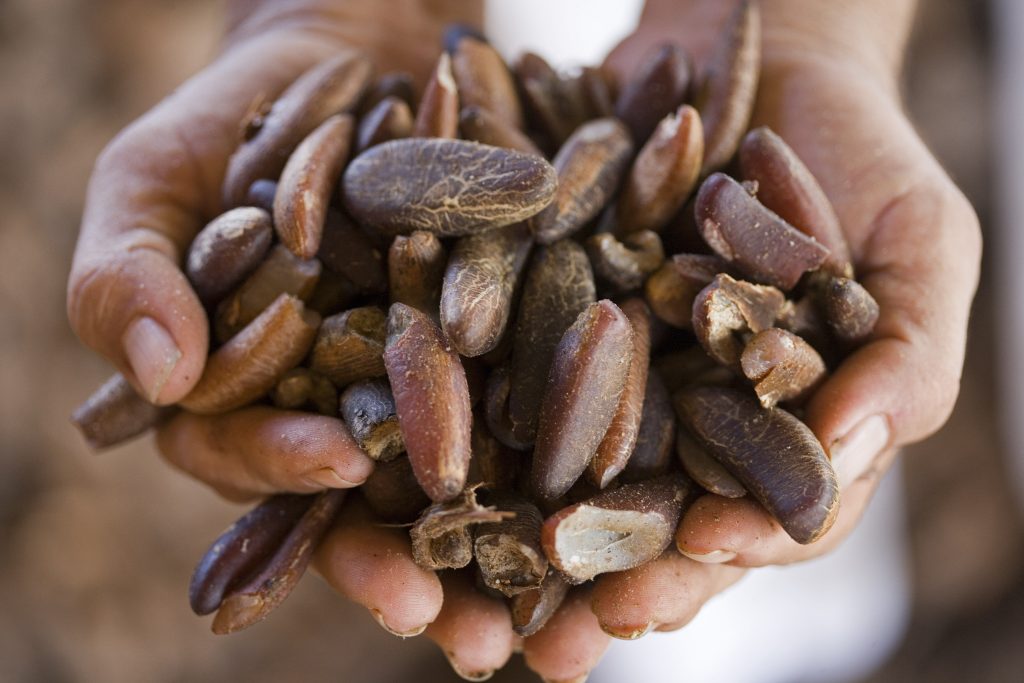 On March 18th, while Dona Dijé was in town to demand the protection of land rights at a World Bank meeting, I sat down to interview her about the Brazilian women babassu nutbreakers movement and her incredible work.

What inspires you to campaign for the rights of the women nutbreakers? How did you become a leader of one of the community organizations?

“The moment of need is what led us to start this struggle. I don’t know much about how I became a leader, it was sort of in the way that we realized that we were taking this road. But it all started because we needed to survive.”

Can you tell me a bit about the community of support you and the babassu nutbreaker women have built together?

“We shared a big commitment. And we as women, we had the full amount of tasks that all women face. While we were [being activists], we were also taking care of our homes, we are looking after our children, we are [doing] chores at home, we are harvesting to bring money into the house. But we knew that we had to do it all and make space to be there at that meeting at that time, no matter what. Because we needed to make things happen for the struggle to succeed. How we did it, I cannot say – I do not know. But we had this commitment and we stick to it.

“It was also important that the male companions could understand that [the] struggle, that fight would benefit us all. It was not just about only women.”

You’ve faced violent opposition in the course of your work – what has kept you going?

“It was not just oppression, it was humiliation. We even heard a rancher saying that a hundred Black people [aren’t] worth a single cow. We were there resisting because the worst thing that would happen to us is to be sent to the [margins] of the city. We would be nowhere. So we faced a lot of oppression, we faced a lot of humiliation but we stayed there because we knew, that if not, it would be even worse.

“And hearing the rancher say that, means for us, the business of livestock is valued much more than human life.”

If you were able to, what one thing would you change that would make the biggest difference for the lives of the people you work with?

“The biggest difference that can be made in people’s lives is to have access to land – is to have their own land. Because from their land, they can support their families, they can make a living, they are autonomous. The worst thing that can possibly happen is to be in the margins of society. By having the land, you own your destiny.”

Do you have anything you would like to leave us with?

“The message I want to leave: authorities and every person must protect the environment because we must leave a healthy environment to future generations.”

Plans to Dump U.S. Grown Peanuts Into Haiti Represent Yet Another Failed Policy