Standing in the middle of Sawo Sonko’s rice field at midday, with drops of sweat rolling down my back, all I could think of was, “Climate change is real.”

As Sawo shared how she was experiencing climate change, it became apparent that my encounter with this human-made crisis, however visceral it was in that moment, was shallow at best. I was experiencing physical discomfort that would soon be relieved by the air–conditioned car we were returning to. For Sawo, a rice farmer in The Gambia’s North Bank Region, dealing with climate change is a constant struggle.

“We used to get enough rainfall and consume that rice [that we cultivated] up to the following season. But right now, climate change has affected our rice fields. Salt intrusion from the sea has affected the rice fields.”

Irregular rainfall is having a devastating impact on farmers in The Gambia. In 2012, severe drought across West Africa’s Sahel region, coupled with rising food prices, caused a food crisis affecting more than 700,000 people in The Gambia. Just last year, dry spells and low rainfall led to massive crop failure.

In addition to battling erratic rainfall and drought, farmers growing rice along the River Gambia are dealing with salt intrusion, the destructive phenomenon Sawo explained to me.

For farmers in the Gambia, salt intrusion is occurring as saltwater from the Atlantic Ocean flows into the freshwater of the River Gambia and seeps into the soil of nearby rice fields. In the past, the rainy season brought enough precipitation for the river to push back against the force of the ocean. With climate change, the rainy season has become shorter and drier, and the river’s water levels aren’t high or strong enough to balance out the salinity of the water.

Because of the excess salt, the soil in the swampy rice fields is becoming infertile and rice plants are not maturing fully. All of this is reducing crop yields and putting a huge strain on small-scale farmers like Sawo. Some farmers have even stopped cultivating on their rice fields because the low yields just aren’t worth the effort.

When three in four workers in The Gambia make their living in agriculture, the climate crisis poses urgent problems not only for the economy but also for the well-being of farmers, rural communities and ultimately the entire country.

Resilience in the face of climate change

Climate change has fundamentally altered the way Sawo lives. With the disruptions of erratic rainfall and salt intrusion, she now can only produce one and a half months’ worth of rice for her family. Like many farmers in The Gambia, Sawo has ventured into new businesses to make sure her family doesn’t go hungry. 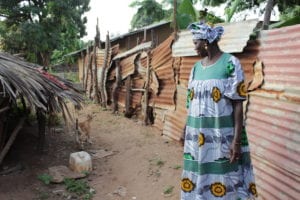 About five years ago, Sawo joined the Agroecology and Resilience Project (AERP), which ActionAid launched in The Gambia and Senegal, following the 2012 drought, to support farmers coping with climate change.

Through the project, Sawo learned the ins and outs of raising livestock, which provided an additional source of income as climate change destroyed rice fields. She received money from ActionAid to buy her own goats and has been building up her wealth by selling the goats and saving part of the proceeds in her bank account. With her earnings, Sawo has been able to pay her grandkids’ school fees and make sure there’s enough food for all 10 people in her family.

And she wants many people in her village to participate in the project, too. She told me:

“Sometimes when I have ideas, I share it with the project. I told ActionAid that the support should not only stop here. If the project is going to continue, then it is better to expand the scope so that others can benefit from it.”

In the Central River Region (CRR) South, far from where the river meets the ocean, salt intrusion is also causing problems. I learned that it is especially challenging during the rainy season, when floodwaters erode the fertile topsoil along with any chance of a sufficient harvest.

With support from ActionAid, community members came together to prevent further destruction to their soil and crops. In Babou Jobe Village, people received training from ActionAid on how to slow down the speed of floodwater runoff. Along the roads, they filled gullies with rocks and wire mesh to build structures called gabions.

“Now we believe that the roads are good, and we will not be struggling like before.”

In the community of Jawlaba, soil engineers constructed contour bunds to divert floodwater runoff away from the rice fields and village and into nearby swamps instead. This water is hydrating not only the rice fields but also the cattle.

“Now we harvest more rice than before because of the contour bund. It has also helped us reduce salt intrusion in the rice field. The cattle [also] have a place to drink without going to destroy the rice fields.”

By creating these simple yet sturdy structures, the communities are adapting to climate change by protecting their fields and homes from flooding and erosion.

Recognizing the importance of a safety net in the event of climate-related disasters, each village also worked with ActionAid to create a seed and cereal bank to preserve food supply for lean seasons. 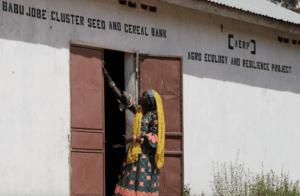 The village of Babou Jobe started a seed and cereal bank as a safeguard against lean harvests, with support from ActionAid. Central River Region South, The Gambia. Photo: Mohamed Lamin Touray/ActionAid 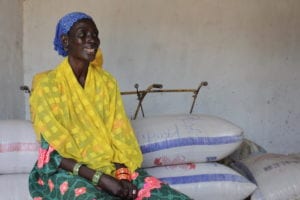 Awa Mbye, president of the seed and cereal bank in Babou Jobe, explained that community members first elected a committee to manage the bank and distribute the seeds and cereals fairly. During the rainy season, when work is slow and food is scarce, people can take however many bags of seeds or cereals they need and drop off their farm equipment as collateral until they are able to pay. Folks who don’t own farming equipment can later contribute 10 cups of cereal as interest – and as a way to replenish the cereal supply.

With this system, farmers no longer have to find work elsewhere just to be able to afford food or pay back double what they borrow from someone else, as was the norm. And in just a few years, the seed and cereal bank has grown to support families in neighboring villages!

“We are very happy with the seed and cereal bank. If our hardship was at 100%, now 75% of that hardship has been reduced. When you have enough to eat, it brings good health, which should be the first priority for every person.”

The climate is changing and so must we

Climate change is not just a theory or concept. For farmers like Sawo, Hamat, and Awa, there is no escaping the daily threats that climate change brings. They are leading their communities towards sustainability and resilience. Those of us who live in the world’s richest countries that bear the most responsibility for causing the climate crisis need to follow the lead of frontline communities. We need to roll up our sleeves, get organized, and demand our governments to finance the fight against climate change.

The reality of climate change is not up for debate. Let’s create a different reality.

Investing in a better future: how TIAA has it all wrong