Women-led response to the Sulawesi earthquake and tsunami

In September 2018, a series of major earthquakes struck the Central Sulawesi province of Indonesia. This triggered a tsunami which significantly impacted the districts of Palu, Donggala, Sigi, and Parimo. As the Indonesian government committed to prioritize locally led efforts, ActionAid worked with local partners to lift up women’s leadership.

Women-led response to the Sulawesi earthquake and tsunami

On September 28, 2018, a series of high-magnitude earthquakes hit Indonesia’s Central Sulawesi province and triggered a tsunami, unleashing landslides that knocked down homes, wiped out farms, and destroyed the boats of fisherfolks .

Our team in Indonesia, YAPPIKA-ActionAid, was one of the first organizations to respond on the ground in the district of Palu. Through their women-led emergency response, they worked with a local network of partners called Sulteng Bergerak to identify the immediate needs of affected communities, especially those of women and girls, who are disproportionately affected by disasters.

Medical student volunteer Dewi checks the blood pressure of Syamsul, one of 1,500 people who found shelter at Langaoge coconut farm in Donggala after the earthquakes and tsunami. Photo: Andri Tambunan/ActionAid

Within the first two weeks, the team was able to expand their response to the Donggala and Sigi districts, providing 60,000 people with emergency supplies, makeshift tents, water, food, mosquito nets, sanitary protection, and baby clothes. They also supported efforts to establish emergency community kitchens to serve hot food to people displaced by the disaster.

Over the next six months, YAPPIKA-ActionAid continued their emergency response with increased focus on resilience building. They worked with partners to build 25 expandable houses, establish and run two Women Friendly Spaces, and train women in the community on protection and gender-based issues.

Women Friendly Spaces: a hub for building power in community

Women are often first responders when disaster strikes, and they face higher risk of violence in the aftermath. YAPPIKA-ActionAid worked with local partners in Palu, Donggala, and Sigi to set up Women Friendly Spaces – protected spaces where women can find community, heal, and build power. These spaces offer alternative experiences to societal norms that exclude women from public or decision-making roles in their communities and that force them to dedicate their lives to caring for their home and children.

At a Women Friendly Space, women talk freely about themselves and receive psychological and legal support in confidence. They discuss issues such as gender-based violence and participate in activities that build their economic independence. YAPPIKA-ActionAid staff and local partners also offer activities and care for children so that women can freely attend meetings without any concern.

Siti “Juli” Zulaika, Director of Solidaritas Perempuan Palu, one of our partner organizations in Indonesia, explains the importance of these spaces:

“Before the disaster, it was difficult for women to develop as leaders outside their homes because they needed permission from the husbands. These challenges still exist but through the women’s groups, women have shown how they can lead the recovery in their communities.”

In addition to supporting communities to cope with loss and trauma, YAPIKKA-ActionAid and their partners responded quickly to basic needs. Immediately after the earthquakes and tsunami struck, two women named Nerlian “Lian” Gogali and Nurlaela “Ella” Lamasitudju led efforts to create dapur umum, or community kitchens, to feed the hungry survivors. The main meal they served was nasi bungkus, a rice meal wrapped in a banana leaf or piece of paper.

“Women like Lian or like my colleague Francisca “Iko” Fitri, who heads ActionAid in Indonesia, are often the first responders to a crisis like this, and they bring knowledge and skills that make the relief effort more effective. They also help prepare the community for the future, preventing new emergencies” — Rachid Boumnijel, Head of Humanitarian Program Quality

What was first conceived to fill an immediate need soon developed into a community space where survivors could meet and connect over food. Much like the Women Friendly Spaces, these kitchens became healing places.

Febriana Firdaus, a reporter who was in Sulawesi just after the disaster, expands on this:

“Cooking together is considered the first step in healing for the victims. Second is building a conversation about their loss and hope after the disaster. The only stipulation the team has, is that it would not help to build the public kitchen unless the villagers were themselves willing to organize the work, ensuring local support.”

An earthquake and tsunami survivor in Donggala breaks a coconut shell, which is then processed and sold as charcoal. Photo: Adrian Mulya/YAPPIKA-ActionAid

More than a year after the earthquake and tsunami that devastated the Central Sulawesi region of Indonesia, communities are still struggling to recover. Though they are currently facing a long dry season that is significantly impacting the livelihoods of local communities, they remain resilient.

Through sustained work with local communities, two Women-Friendly Spaces have been established and continue to operate, providing more than 400 women with a community of mutual support, respect and empowerment.

In the Donggala district, women are making their livings in sustainable ways, from processing coconut fruit into coconut oil to creating charcoal from the coconut shell. And across Central Sulawesi, YAPPIKA-ActionAid is forming 12 women-owned small businesses so that women can generate their own income. Women learn about business management, develop business plans, and receive equipment to produce everyday products like coconut oil and banana chips.

With support from ActionAid, Ami sells produce in a market stall in Palu. Photo: ActionAid

Our ongoing response in Central Sulawesi is just one example of how a community can build back stronger with women at the forefront of recovery.

Women’s leadership is essential to disaster response. Not only does it help address power imbalances, but experience shows that women and women-led initiatives strengthen local emergency response.

Women bring a strong understanding of their local context and the needs and realities of women, girls, and their community. They often have better access to more rural communities that might be harder to reach and within those communities, those who are most marginalized. They offer crucial insights to further engage with other response efforts as well as decision making spaces that might increase aid or better prepare for future disasters.

If local women and women-led organizations are not supported to lead within local processes, there is a risk that the needs of communities will not be met, and their exclusion reinforces structural inequalities.

Our teammate, Rachid Boumnijel, Head of Humanitarian Program Quality at YAPIKKA-ActionAid, shared his thoughts on this:

“…all too often, when disaster strikes and a relief effort swings into action, women are marginalized, and their skills ignored. When this happens, the whole community suffers. [So] one of the most humbling things about being here, as a man, has been witnessing first-hand how vital women are to rebuilding a community. I know from experience as an aid worker that, when local women lead the response to a disaster, it can make a huge difference in the long term.” 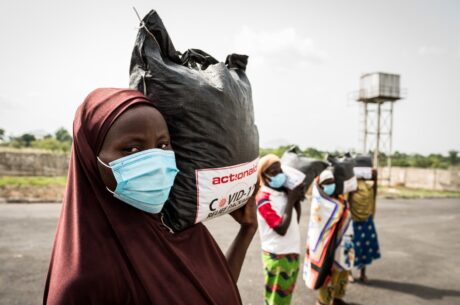 Combatting coronavirus through community-led response
Next 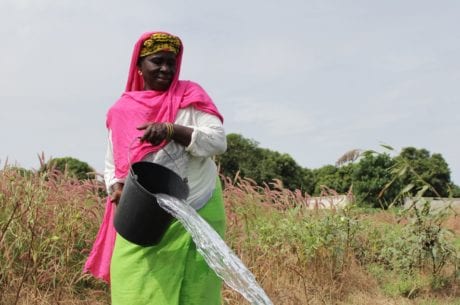 The Food and Agriculture Sector Development Project in The Gambia