We Are Human Beings: Syrian Refugees Organize to Transform Lives

“For the time that we are here, we will build this country. When we go home we will rebuild our own civilization.”

When crisis hits, international humanitarian organizations respond – bringing in food aid and other material support. This first response is important, but it is not enough. Here at ActionAid, we respond differently, as I witnessed on the Lebanese side of the Syrian border earlier this month. We believe that crises can also be opportunities to make change and transform lives.

The Syrian refugees I met in Lebanon have embraced this belief. They are changing their circumstances in Lebanon and building their ability to be agents of transformation in their own homes, the refugee community, and their host country. Ultimately they are preparing to build a new Syria where women’s rights are respected and protected.

ActionAid has been operational in Lebanon since 2010, working with young people and supporting them to be organizers in their communities. Our staff come from the Lebanese Bakaa Valley, the same valley where ActionAid works. When the Syrian crisis started pushing Syrians across the border into the Bakaa Valley, these young people built two community centers, one of which is only 15 minutes from the border. The center seeks to serve young women and girls ages 14 to 35. The center has community space, classrooms for trainings, child care for the young mothers, and computers for the refugees to use. 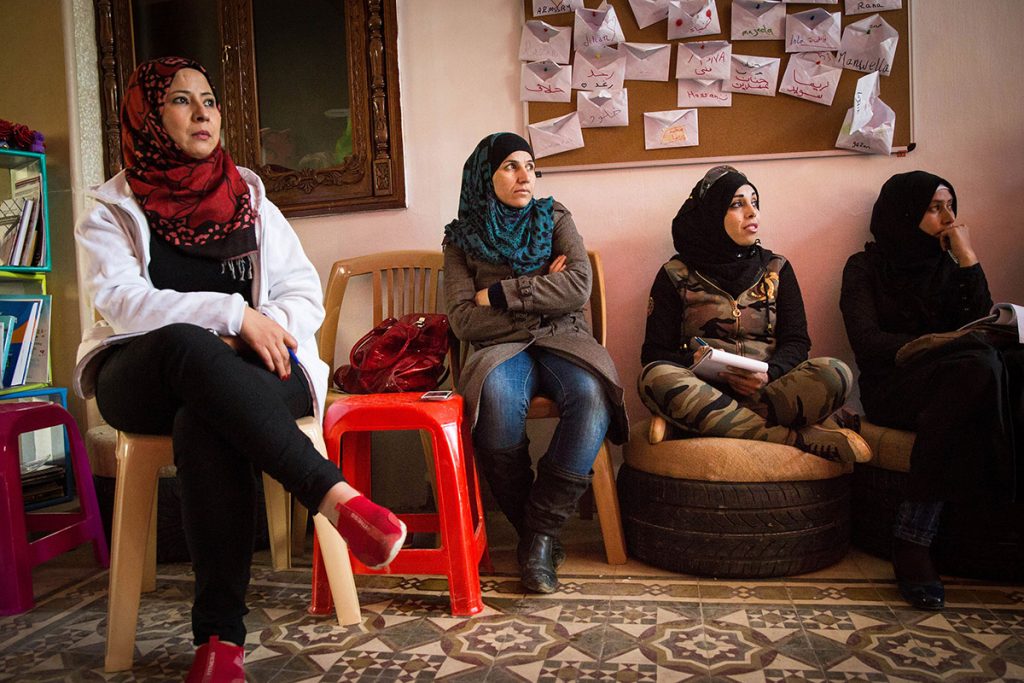 The first room I peeked in was filled to the brim with women, all covered in head shawls, some with only their eyes showing. There was a trainer at the front of the room writing on flip charts while the participants were fully engaged, asking questions and making vibrant hand motions. I learned that the women had requested this training, which was on contraceptives.

ActionAid had hired Raimaa, who had been a community health provider in Syria and fled to Lebanon four years ago, to lead the training. The room of Syrians, with someone from their own country and culture leading the training, were free to ask all the questions they might not have felt comfortable discussing with a Lebanese health provider.

As I spoke to circle after circle of women and girls, I heard their heartbreaking stories of fleeing their country and of separation from family members. Some had left family behind. Others were separated on the journey. Many of the husbands have left Lebanon, striking out for European shores in hope of finding work to provide for their families.

All of them expressed how important it is for them to be able to come together in a safe space as women, to build community, to learn from one another, and to chart pathways to economic empowerment and recovery. They talked about how disempowering refugee life can be. They don’t want aid. They want empowerment – and that is why they come to ActionAid.

“Here at ActionAid we found our rights. Even as refugees we know our human rights. We are human beings. We can claim our rights. We stand up for them.”

While Lebanese law prohibits refugees from some forms of work, especially for men, the women have found ways to protect the livelihoods of their families. They are starting small businesses. They have greater mobility and opportunity as women in the more open Lebanese society than they had in Syria, and they plan to take their experience of empowerment home to Syria one day.

“We will never again be confined in our homes,” 16-year-old Reham said to me.

Each of the women dreams about ultimately going home. They have full recognition that the Syria they return to will need to be rebuilt – not only in terms of infrastructure, education and politics, but socially as well. They see themselves as the drivers of that transformation:

“The change starts with us as women. Then we will change our community.”

When I think of their stories of pain, loss, migration, violence, and the struggle to make a home in a strange land, I am deeply moved by their resilience. They continue to smile and laugh and dream of their futures and the futures of their children. They have thrown themselves into building out their community centers, painting the walls with their maps that chart out change.

These women have not been defeated by the conflict they fled. They are building their future with courage of conviction that is incredibly inspiring.

Beyond World Refugee Day, I invite everyone to join ActionAid to expand this transformational work, supporting the refugee women who are building a new and safer future for us all.

Millions of people are fleeing and risking everything to seek safety outside of Syria. ActionAid has been working with Syrian refugees since 2013. We support families across affected areas, providing emergency supplies and helping children who have been traumatized by the conflict. Please make a gift right now to support Syrian refugees.

The U.S., Nicaragua and Syria: Out of the Paris Agreement, but for Very Different Reasons