When governments fail, civil society sets the agenda: a look into COP 25

Every year, the world gathers at the United Nations annual climate summit – the Conference of the Parties, or COP – to discuss and develop ways forward for tackling the climate crisis. This space was originally designed to deliver global justice wherein every country represented could be just as powerful as the next and have just as much say on how to tackle global climate change. However, time and time again, we see developed countries take control of the negotiations and push agendas of their own best interest that do not consider the immediate and future reality of those on the frontlines.

This makes the fight for justice harder, but not impossible. In the face of inequitable representation, the presence of civil society (people working outside of government) is still strong in the negotiations, in meetings, and on the streets. This year, as we do every year, we are making sure that as we talk about solutions, we don’t lose sight of climate justice. Here are some highlights of that people-power in action from the first week of COP 25: 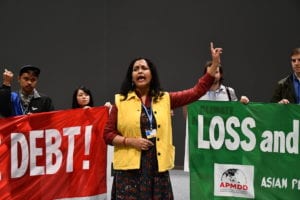 Climate justice groups kicked off the week demanding climate reparations and finance for those experiencing the worst impacts of climate change. Our global lead on climate change, Harjeet Singh, is calling for this in the form of a new fund to support climate survivors now. 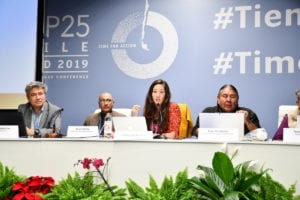 “When our food systems become so dependent on chemical fertilizers, it turns out to be a real climate disaster… That’s why we need a just transition in agriculture. We need to transition back to traditional knowledge and agroecological methods – methods which work with and for indigenous farmers.”
– Teresa Anderson, Climate Policy Coordinator, ActionAid International 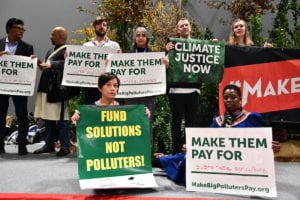 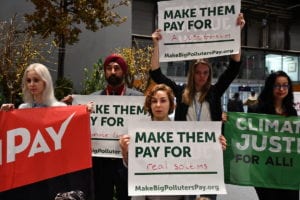 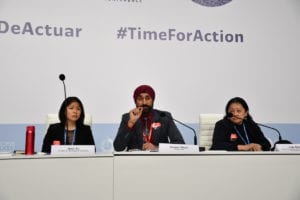 Big Polluters like BP, Shell, and Chevron have found a way into these climate spaces to push their schemes and act as if they are champions of climate action, even though they are the ones making the crisis worse. In a climate emergency, we cannot continue to extract fossil fuels. Find out more about the campaign to Make Them Pay here.

“Women are the custodians of seeds, of food, of life. That’s why we work with women, that’s why we stand up for the rights of rural women farmers.”
– Ellen Matupi, Chair of the Coalition of Women Farmers in Malawi

ActionAid worked with the UNFCCC Secretariat to ensure voices from the ground of women smallholder farmers were heard alongside scientific presentations on the issue of nutrient use in agriculture. Ellen Matupi is a partner of ActionAid in Malawi and has supported 300,000 women farmers to use agroecology as a key strategy to build resilience and fight climate change. 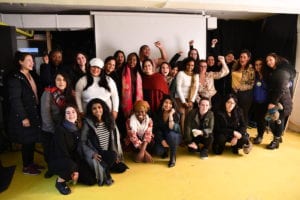 The young feminists from around the world who gathered at the Youth Working Group’s convening to discuss solidarity in the feminist movement for climate justice. Photo credit: Jenna Farineau/ActionAid

In climate talks, rich countries are getting away with murder