A few weeks ago, I was a part of a delegation to El Paso, Texas, and Juarez, Mexico, to witness the realities along the border.

As we spoke with asylum-seekers and humanitarian support coordinators, we consistently heard the same stories of abuse: asylum-seekers beaten by agents, their documentation and possessions stolen by agents, overcrowded to the point that they slept standing, illness and ice burns from the freezing temperature of the holding cell. When we asked a representative from Border Patrol in El Paso to comment, she replied, “I find that hard to believe. If this were really happening we would’ve heard about it.” 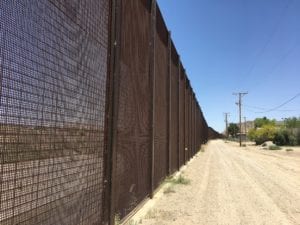 I watched as 23 asylum-seekers in one docket stood before a judge for the “crime” of entering this country. Many of them, handcuffed, could not even physically raise their right hand to take the oath. At one point, a lawyer told the judge that her client is being repeatedly denied his medication in detention; the judge said he would look into it. Later when I asked, he said dismissively, “They complain a lot, but nine times out of ten it’s not true. It’s just a miscommunication.” 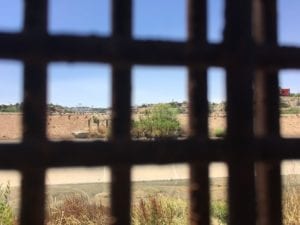 This one-two punch of atrocity and institutional disregard showed up again and again throughout our time at the border.

Border Patrol agents told us the solution to all this was, unsurprisingly, more funding for Border Patrol, but no amount of money can reform an agency designed for cruelty – especially given recent revelations that have shown just how depraved Border Patrol internal culture has become. When asked if the agents could imagine any other solution – anything at all – they said no.

While powerful people deliberately refuse to imagine better, frontline communities are already stepping up. The asylum-seekers we lived with at the shelter, undocumented folks we spoke with in El Paso, the activists, volunteers, pastors, and doctors who shared their accounts with us are fighting for the basic rights of refugees and immigrants every single day. A network of community members has mobilized to provide food, shelter, clothing, and medical attention to upwards of 1,000 asylum-seekers a day as they’re released from ICE detention in El Paso and the surrounding area. Immigrant-led activist groups are leading protests and continuing difficult dialogues with Border Patrol. Asylum-seekers are surviving, finding safety and community in the U.S., in fierce defense of their own dignity.

The short-term solution these communities and activists are seeking – the one that Border Patrol agents are incapable of seeing – is deceptively simple: our government must stop putting people in jails for the mere act of crossing the border without papers. We are not fighting for better conditions for children, families and people in cages. We are fighting for their freedom and their fundamental human rights.

And the long-term solution? We demand that governments around the world recognize that migration is a human right. We recognize that people move their lives for reasons that are their own, and that for many Central Americans migrating to the U.S., those reasons are directly linked to our own government’s toxic, imperialist foreign policies. The humanitarian crisis at our border would be resolved by simply decriminalizing the act of migration, recognizing the shared humanity of everyone regardless of where they were born.

Mural in one of the migrant shelters in El Paso, which reads, “Si me matan, resucitaré en mi pueblo.” If I am killed, I will rise in my people. The words of the Salvadoran Archbishop Oscar Romero, assassinated in 1980. Photo: Rachel Carle/ActionAid