Lobbyists for giant Malaysian palm oil firms are elated. This week, they sent out an email blast saying: “Guardian Investigation Finds the EU’s Palm Oil Ban Would be a Disaster.” But there was no investigation – just an article that failed to explore all the global and local issues at stake. 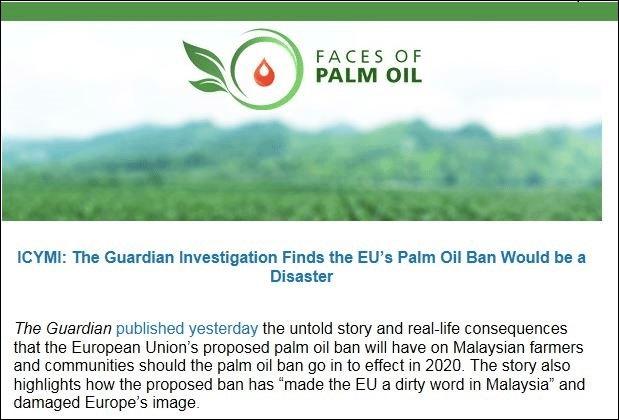 Guardian writer Hannah Ellis-Peterson met with small-scale palm farmers who have been told by the giant palm oil companies and buyers that they will lose their market due to the European Union’s proposed palm oil ban. Yet in her article Ellis-Peterson fails to explore the likelihood that the policy may have little impact on the farmers she interviewed. The policy will be enacted in a world where the market for palm oil in processed food continues to grow. The goal of the proposed EU ban is not to undermine local palm farmers’ livelihoods. Rather it is aimed at curbing the ongoing expansion of palm oil companies into forest areas and indigenous and community lands around the world.

Communities and forests in southeast Asia and over in Latin America have been hit hard by expanding demand for palm oil. Indigenous communities in Guatemala have gone to the Inter-American Commission on Human Rights to ask that palm oil expansion be halted due to the loss of indigenous and the poisoning and misuse of their water. A large amount of Guatemala’s palm oil is shipped to Europe through the port of Rotterdam. Government policies that lock in demand for biofuels within transport fuels have created this expanding damage. It’s past time to fix it.

Across the tropics globally, palm oil has become a large-scale plantation crop. When smallholder farmers invest most of their land in palm oil, they end up at the mercy of the palm oil companies.

In some places, especially where it is used in traditional cuisine, palm oil may have a place in diverse production by farming communities. Family farmers across the world need policies that support the production of diverse and nutritious food, not policies that destroy communities and forests for the sake of cheaper fuel.

Global Governments Aren’t Embracing Agroecology – Here’s Why They Should